What is the Value-Added in School Today?

The last month has seen extensive travel (over 25,000 km flown) and wonderful opportunities to connect with colleagues from all over Canada and the United States. I’ve been focusing some of my work around the concept of “value-added” in schools today.

Let me start by saying that I believe the value-added component for me, as a school student, was knowledge. School was the only place you could get it and the teacher was the font of information. Every day I went to school to get the next chunk of knowledge. That was the life of a student BG – Before Google. Today, knowledge is the easy part as technology has made it accessible in a variety of formats and instantly. It is important that we continue to stress to students that it is critically important to ascertain the veracity of the knowledge being dispensed. Just because it is on the Internet does not necessarily make it so.

I think the value-added today centers on three components:


I’ll elaborate on each one below but first let me suggest that it’s long past the time where school should look the same as it did generations ago with no evidence-based justification for doing so. We have 21st century students being instructed by 20th century adults using 19th century pedagogy and tools on an 18th century school calendar. We can and must do better.

Critical thinking requires a shift in both teaching and learning. It compels teachers to move beyond the right/wrong dichotomy that has dominated education, to exploring the uniqueness of an alternative response that may drive more powerful connections to the material. It compels students to be risk-takers in their learning journey and have the confidence in their thinking to move beyond a presumed answer. A recent example occurred with a group of teachers who were sharing an activity where two lists were generated by the class. The first list identified methods of transportation (car, bus, jet, bike, walking) and the second list identified locations (school, friends, park, market, movie). The objective was to match a transportation method with a location. One student identified jet and market. Rather than taking a typical action and marking the answer wrong, the teacher explored the option with the child suggesting that a jet needed space to land. The child beamed when explaining that his uncle was a jet pilot and he knew that a jet needed a certain amount of space to land. He further explained that in measuring the parking area by the market he had room to spare. Activating the child’s knowledge identified a much deeper thought process than grading his response as wrong could ever have produced.

Engagement speaks to a need to connect the learning with the world our students live in or experience. School should look different in each area I visit and be contextualized to the local community. School with high First Nations populations should embrace that culture as should schools where technology is a big part of the region. Students need deeper connection between the work and the world. We have to stop with the inane math question that reads like this:

Tommy brings 73 kumquats to school
to share with his twelve classmates. How
many kumquats does each friend receive?

The students actually never get to the math! Some have no idea what a kumquat is (but it’s a delightful word that they just repeat all day and use out of context), while others wonder if he loaded them in his backpack and got on the bus. What if the driver slammed on the brakes? Would there be kumquat juice all over the place? Why does he think his friends want kumquats? What class has twelve kids? There must be more practical, real world engagements that hook the kids in their learning and deepen the importance of the application of knowledge.

Collaboration speaks to a much deeper and richer process than has been utilized in schools, and with which our students are all too familiar. It has to extend beyond assigning a task to a group of four and only checking their work upon completion of that work. In that scenario often the most able student does not want their grade affected. After sizing up the capacity of the rest of the members that student may determine they are the smartest and will simply do the bulk of the work while putting all of the names on it. Authentic collaboration is also a process that has deep learning for all. Skills involved in engaging peers in meaningful dialogue, recognizing strengths of others, and achieving a common goal will put our students in good stead.

That’s my recent thinking on today’s value-added. I’d love to hear your thoughts on the three I’ve listed and would especially appreciate any additions or extensions you might have. 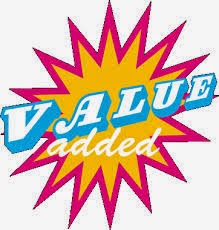