I had the opportunity to attend the Canucks - Bruins game last night.  My intent was two-fold.  One was to watch the Bruins (who are the sworn nemesis to my beloved Canadiens) lose to the Canucks.  The second was to try and get a puck during the warm-up from one of the Boston players to send to a friend in Newfoundland who is afflicted with Bruins fever.

I arrived early with a buddy from work and we headed down to ice level.  I had a sign with me that included the Bruins logo and a few sentences that read "Die hard Bruins fan from Botwood, Newfoundland. Please toss me a puck. Thanks." Friendship will cause you to do things you wouldn't normally do and being that close to Bruins fans and sporting their logo was a small price to pay for the imagined thrill the puck would create for Jim.

As the Bruins were winding down their warm-up, Tyler Seguin (the 2nd overall pick in the last draft) stopped to read the sign.  I watched him complete his drill and then cradle the puck with his stick and skate back to my location.  He pointed to me and then tossed the puck over the glass.  What a classy move for that young man! The educator in me thought "he must have learned some valuable lessons in school", and the Dad in me thought "his parents must have instilled some very strong notions of selflessness". My buddy from work saw the whole scene unfold from his vantage point in the corner (we thought he could cover the end of the rink and grab a puck that went over the glass) and came over to celebrate the successful accomplishment of the task.

What he didn't realize was that after cradling the puck, I caught the eye of a young Bruins fan who was attending his first game featuring his heroes.  His Dad told me how excited his five year old was and how the whole day had been the constant questioning ("Are we going now?", "Now?", "How about now?") that five year olds are great at. He was wearing his oversized Lucic jersey like a robe and was eyeing my recently acquired souvenir.

You all can predict what happened next.  Really, what choice was there? His eyes just danced when I told him the puck was his. His Dad (who had the background of my quest because of my sign) tried to get the puck back to me but there was no way I was going to be the one to erase the pure joy that was written across his sons' face.

I'm sure Jim will understand and I know he would have done the same.  For me? It was probably a good thing to get rid of that Bruins memorabilia as I couldn't imagine the penance I would owe to the hockey gods of Montreal.

Paying it forward always yields its own rewards. 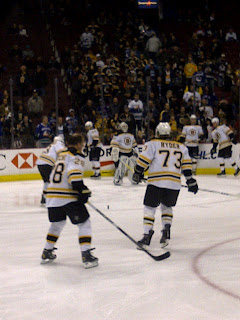 Zero? Really, they learned nothing?

The "zero debate" is alive and well despite the compelling information that leading educational thinkers like Tom Guskey, Doug Reeves, and Grant Wiggins share about the lack of accuracy that is the end product of this practice.  In an excellent post recently on his blog (tomschimmer.com), Tom Schimmer notes "More often than not the zeros, and the resulting lower grades, move kids to a place of hopelessness where they would rather give up than try."

So why does the practice continue? More often than not I hear the response around fairness and/or consequences for a perceived lack of effort.  "The student earned a zero", is passed off as the rationale.  Recently I was talking with a group of secondary teachers and that defense was offered. I pushed back a little with the suggestion that I found it incomprehensible that, based on their skill set, training, and aptitude for teaching, any one of them could spend an instructional phase with students and not impart any knowledge.  That's what a zero means! After two weeks of skilled instruction, nothing was learned.  Is this even possible given the talent of the vast majority of teachers I have encountered? Absolutely Not!  On some levels the zero reveals more about ineffective adult practice than student performance.

When confronted with this perspective, the tone of the conversation quickly changed.  Let's focus on what's happening for students throughout the instructional phase.  Let's use assessment in a formative fashion so that we know, almost immediately, where students are during the learning phase. Let's commit  to bringing our entire skill set to impact the end result. Let's employ numerous strategies and share our passion for student success with all of our kids.

Once we can turn the discussion to whatever it takes in order to have students succeed, it's amazing how the zero debate has less traction.  We may never completely eradicate them from our marking system but they should serve as reminders of something needing improvement rather than a rationale that creates further disillusionment and disengagement.
Posted by Tom Hierck at 10:52 PM 4 comments:

I was very impressed by the information our elementary students presented when we gathered a group of them to talk about technology and, specifically, cyber bullying.  While anticipating something similar when we met with the high school group, I was not prepared for the total learning experience it turned out to be.

As we engaged in dialogue about the security systems in place to prevent students from accessing the internet, I quickly discovered that our attempts were all but futile.  From proxies to tunnels, students would find ways around anything we might put in place.  It became a bit of a game to them as to how quickly a student could get through.  They discovered the passwords and quickly shared that around.

Just as my head was ready to explode from all of these revelations, the real value of engaging student voices emerged.  They spoke about their values and recognition that some sites should be off limits and that they needed to manage these amongst their peers. Of significant importance to our trustees and management team was the suggestion of a committee of students who would work with adults in the school system to create guidelines for internet use.

This seems like a much better plan than the simple imposition of rules created by adults to manage kids that are largely ineffective.  Thanks to the students for your participation and creative contributions!
Posted by Tom Hierck at 10:03 PM No comments:

All of us who are connected to education (and generally speaking that is all of us) know the challenges that exist daily.  I have come to believe that it is not the challenges that wear us down as much as our responses to those challenges.  How do you respond to the latest challenge in funding? The new student that arrived yesterday? The staff member that seems trapped in the "good old days"? Do you see the obstacle or the opportunity?

Dr. Randy Pausch, who wrote "The Last Lecture", talked about brick walls and how they might impede our progress depending on our view. "The brick walls are there to give us a chance to show how badly we want something", he wrote.  If you find yourself up against a brick wall, will it stop you from moving forward or will you find a way around, over, under, or through?

By focussing on the opportunity, there exists the possibility that a breakthrough might occur that will promote success for that new student, reconnect that staff member to their passion and purpose, or generate a conversation about outcomes rather than financial inputs.

Look to the opportunity and look past the obstacle.  Remember, "No you already have - Yes you can still achieve."
Posted by Tom Hierck at 9:01 PM No comments:

Highway 46, the brainchild of Superintendent Deborah Palmer, began as a vehicle to encourage and elicit student views on many educational topics.  Elementary and secondary students are invited to meet with management staff and trustees for a couple of hours during the school day.  Schools identify students from across their population for participation in two or three of these meetings during the school year.  The group always changes as does the topic for each of the meetings.  Pizza for lunch ensures the body is nourished as well as the mind. This initiative has promoted strong student involvement in educational issues through participation in these Highway 46 meetings.

Our next set of meetings is coming up on February 11th and 16th and our topic will be technology with an examination of cyber bullying.  The student views have served to influence the thinking of the adults who are looking to shape policy that will allow students to succeed.

What's happening in your schools and district?
Posted by Tom Hierck at 10:48 PM No comments:

Why we thank coaches...

When a school receives a message like this, it's another reminder of how fortunate we are to have people who volunteer their time to coach and mold young minds.

"I just wanted to send off a quick email regarding both the coaches and players of the Elphinstone Juvenile boys basketball team. I refereed the boys game versus Argyle this past Wednesday and to say the least, I was incredibly impressed with how the team carried themselves. In a game where they clearly out matched Argyle, your coaches did a great job  of mixing up playing time, forcing their team to run offense etc. to help keep the game as close as possible. Classy!!!!

Moreover, I was working with a leadership student who was new to the game and I found that your coaches and players were very supportive of her learning to referee.

Emails to the district athletic director and referee allocator are often negative feedback about referring mishaps or coaches' conduct but I wanted to make a point of pointing out a positive experience with the Elphinstone group."

If you give students both the opportunity and the tools to explore their passion, you will find they often go beyond expectations.  Our schools are bursting with good news and we need to be the conduits for sharing those stories.  Last night I had a chance to attend a wonderful dinner prepared by six students and their instructor as a culminating activity in the culinary arts program.  Dining on roasted bison, bannock, salads, yams, roasted vegetables and scrumptious desserts was its own reward but seeing the pride on the faces of the students really made the meal. 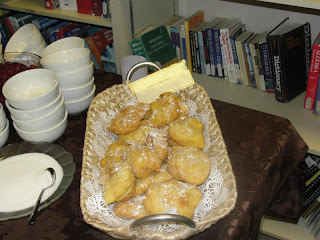 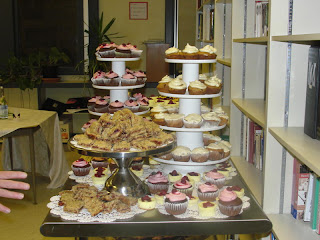