And We Wonder Why the Homework Is Not Done?

When I get the opportunity to present on the topic of school culture and building relationships I often conclude with a personal story that ties together many of the concepts I've presented over the one or two days. I share my story with the participants neither for their sympathy nor their admiration as it's just a part of who I am. I haven't always been able to share the story and it is still a visceral experience for me but I share it because of the connections it makes for others and the responses I've had shared with me. Of all the moments in this work those are the ones I treasure the most and feel humbled that individuals would share some very personal and heart wrenching stories with me. One of these moments happened recently and Barb took it a step further by inviting me to share her story with others in the hope that it would serve as a reminder to both kids and adults about the infinite possibilities that lurk inside each of us. As you read this make the connection to the title of this post. Here is Barb's story:

As a child, growing up was hard, we had lived in poverty. I am also a twin, and had lived with my dad and other siblings. With my mother gone and out of our lives, it was hard not knowing who and what she looked like. Our house was known as a party house, where there would be a lot drinking and there would be all sorts of people hanging around all the time. A lot of times I would wake up from under the bed from hiding because of the fighting going on. I would listen for people talking, if it was silent, then I knew that they had left or were passed out, I then would come out of hiding. I was pretty much scared of everyone that came to drink there. A lot of times we'd get hungry due to the fact Dad had drink up the Allowance or Welfare money, which came once a Month. I experienced a lot of negative things during the times when they would come and drink, especially one thing I would not mention that would have a negative impact for the years that followed. At 14, I had dropped out of school because, as a teenager, I thought I didn't need it. I was sure I knew it all.

At 15, I ran away from home, being tired of everything and everyone, never changing routine at home. I ended up in Thompson, Manitoba, roaming around but I never touched alcohol or even smoked. I'd just do babysitting, in order to get room and board, or even crash with friends. At 17, that's when the hurt and anger surfaced because of my past experiences as a child. I had started to smoke, drink, and do drugs, this was to numb the pain, I was experiencing. The anger I felt was targeted on everyone I met and that got me into a lot of trouble, including jail time.

At 18, I had my first child Walter and still, I was having a hard time, knowing I had to give him up. Due to the fact I was not educated and what kind of life would he get from a dropout. It made me think back during my time at school or what I vowed before, that's when I had to try and support myself and to try and send money to my son, who I had given up for adoption. I found my first job, as a waitress at Ponton Service Station. I worked there for 2 years. It was okay for awhile then again, my past had resurfaced again. My pain and anger, was due to the fact I couldn't forgive and forget. It was the same routine, using drugs, smoking and drinking, anger that would come with would land me in jail. During my time in jail, I thought of my life and how I messed it up so.

At 20, I had my second child Precious, and then along came Shawn. This time, I thought about my past, what I went through, reminding myself what kind of life would I be able to give them. I had lived in an apartment building in Thompson, Manitoba. I remembered my times, I had spent hiding under the bed as a child, thinking I would not let my children live and experience what I went through that I would provide for my children and reach my goals I had dreamed of doing and having.

A drop out at 14, I would have to start from scratch but I intended to no matter what for my children. At a grade level 6th grade, I started to attend night school at Thompson Friendship Centre. Even though I had a hard time with babysitters I would try my best to attend. When I moved back to Cross Lake, I was accepted to College Preparation level1, which was a promising start. At 25 I attended Brandon Friendship Centre, this time at a grade 10 level. Then came Brandon Adult Learning Centre, which was a grade level of 11 and 12 in one year. After I graduated, I had done 6 grades in a two year span. I had set out a goal, I had always had in me but those things that had happened to me as a child had smothered those dreams I had within.

Barb is quite a success today. She has a four bedroom house of her own, a vehicle and a skidoo. She works both as an Education Assistant and an On-Call Worker for a local agency. She credits her elementary school teacher, Judy Halcrow, for teaching her to believe there is hope and that dreams can be realized no matter what background you come from. It's a reminder of the amazing capacity we have as educators to light the fire within every student, to help them become the success they were intended to be. The final words go to Barb:

There are things that will hold you back to accomplish your dreams, if we don't learn to forgive and forget; we will be stuck in that kind of life, the kind of life where we go or run to, to numb our pain within. Today I work in the same field as her and I'm sure she would be happy to know that the love and compassion she had given me has been passed on to so many others and I am sure will live and be passed on for years to come.

Let's stop wondering why the homework's not done and return to the focus of helping kids become the wild successes they are destined to be. 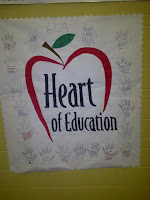