Tribute to a Friend

Art Vallis was my friend and his passing has brought a flood of memories and recollections. The service held to honour him was a wonderful tribute and had us all feeling the range of emotions. But mostly I smiled because that's what Art would have wanted. He always raised my spirits whenever I had the good fortune to be around him. This picture is how I will remember Art - in control, a smile at the ready, and a twinkle of mischief dancing in his eyes.

At the service we heard about many of Art's accomplishments like being one of the original group that began the "Painting in the Park" initiative for Vancouver students, and his tireless hours to have the "United Way" campaign take hold in the schools, and his work mentoring and supporting leadership development. The funny thing is, I never heard about any of these things from Art. That just wasn't his way, not the reason why he did the things he did. He truly was all about elevating others and helping them to become what they were meant to be. He was willing to mentor and teach but only if that was what you wanted. He was just as comfortable to be "in the moment" and learn from you. He enjoyed bringing smiles to others and having a reason to smile. This picture of my son, after a fishing afternoon with Art, only shows one half of two great smiles that afternoon. 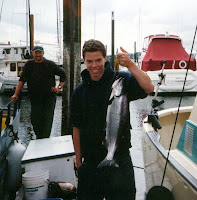 Art retired after thirty-five years as an educator in British Columbia that included many roles. He retired the year before I began my own career as an educator and was a bridge to education in a different time. What he taught me though, was that one key thing has never changed in our profession - relationships matter! Build those and continue to nurture them, and all the rest of the roller coaster world that is education will feel like a great ride with good people to share the experience.


I didn't see Art often but I often felt inspired in his company. I am grateful that my wife and I went over to celebrate his anniversary with Marian a few weeks before he passed away. Despite all that he was dealing with, he was the true gentleman and a gentle man. I always left his company feeling there was so much more to talk about. When I have spoken about Art, people have asked me if he was a father figure to me. While that would have been more than welcome, he was so much more than that. Art Vallis was my friend and I will miss him tremendously.
Posted by Tom Hierck at 7:29 AM